Year of the Fish Theatrical Debut 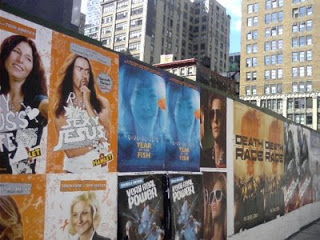 It’s great to see ‘Year of the Fish’ posters right there next to Rock Me Sexy Jesus and Death Race. David Kaplan’s Studio Artist animated feature film ‘Year of the Fish’ will be making it’s theatrical debut in the US on August 29. Initial showings are at the Kabuki Theatre in San Francisco, the Shattuck Cinemas in Berkeley CA, and the Angelika Film Center in New York City. Later showings include the Hollywood Theatre in Portland OR on Oct 10 and Santikos Bijou at Crossroads in San Antonio TX on Oct 17th.

For those of you who haven’t seen the film before it’s a really great artistic showcase for how to utilize Studio Artist auto-rotoscope animation in a non gratuitous manner that really helps to showcase the underlying story and moods of the film. The film looks awesome on a large theatre screen and should not be missed. Spread the word and take your friends to see Year of the Fish on the big screen.