The Joy of Displacement Mapping 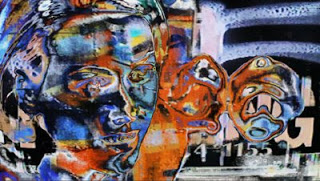 Displacement mapping is an extremely useful technique to master and include in your digital effects toolbox. By displacement, we typically mean that individual pixels in the processed image are generated from different spatially modulated positions in the image. So you can think of displacement mapping as being a warp process.

Displacement mapping an image by itself is a useful effect. Using random noise from the Smart texture Ip Op or the Texture Synthesizer as the modulation image is another useful technique. The Texture Synthesizer has a specific Displace Effect Type that performs displacement mapping based on the texture field being generated by the texture synthesizer. The Displacement Ip Op also has Algorithm options that use uniform random noise or the texture synthesizer output as a modulation source among the many different options provided there.

I recently was asked about how i achieved the effect shown in the image above. The face images in the movie appear to be made out of glass or transparent plastic in front of a colored graffiti static background.

This particular effect was actually achieved by temporal displacement mapping, which means that the face image was used to modulate into a range of different frames of a movie which consisted of a stack of graffiti images. So the displacement for a particular output pixel is being generated by movement through time in a movie as opposed to spatial movement. Temporal displacement is one of the many different Temporal Ip Ops available in Studio Artist 4. However, you can achieve a very similar effect in previous versions of Studio Artist using a more typical spatial displacement mapping in a static graffiti image.

One thing to be aware of to make this particular effect work well is to have the faces or other objects in the source movie you are processing be in front of a flat colored static background. This movie is going to be used as the modulation source for the displacement mapping. You can do this by loading your face movie into the source area. The static image you want to use as the background for the glass effect needs to be loaded into the canvas for each frame of the animation.

The screen snapshot below shows the face movie loaded into the source area and the editable controls for the Displacement Ip Op.

Note that the Canvas is specified for the To Be Displaced option. The Algorithm is the Fixed Angle, Ip Source Modulates Amt. And the Ip Source is set to the Source Image. So these settings specify that the source movie will displacement modulate the canvas image. The output of these displacement settings applied to a static graffiti background image in the current canvas layer is shown below. The effect created makes the source movie frame appear to be rendered as transparent glass in front of the static graffiti background. 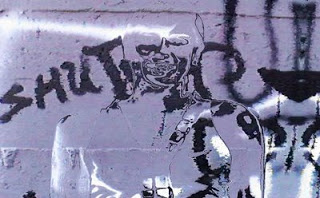 You can then use the source luminance to frame index the movie. And you can use region fill as brush pen mode with a Full Screen Generator option in the Region as Brush Mode control panel to fill in the entire canvas with a single paint step. This is a useful trick whenever you want to configure the paint synthesizer to generate effects that process the entire canvas in a single paint step.

We’ve barely scratched the surface of what you can do with displacement mapping. So it’s worth the time to explore this technique and learn all the different things you can do with it. I often use subtle amounts of random noise modulated displacement mapping to subtly distress or age a painted canvas as a final post processing step. The best way to get a handle on this effect is to experiment yourself with different processing options and different source modulators.