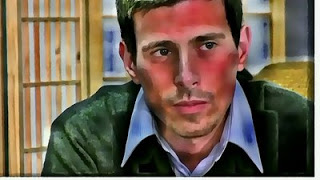 Christopher works with a twin Canon HV-30 HDV camera rig for shooting his stereographic source footage. The cameras are first mounted on a slide bar, something like a tripod plate that holds 2 cameras at adjustable distances from each other. The minimum distance used on the shoots was 72mm centers, just wider than the 65mm typical of adult human ocular spread. For long vista shots this can extend to a maximum slide bar width of 104mm. The relative angles of the cameras during shooting, as well as the separation between the images as they are combined in post, show depth when viewed through cyan and amber glasses easily and inexpensively available online.

Christopher then processes the 2 matching channels of his raw footage one at a time through Studio Artist using a Paint Action Sequence designed to create a cartoon style effect. He then uses Nuke in post to recombine the procesed footage into a single color coded anaglyph stereoscopic film, which can be viewed in stereo with colored stereoscopic glasses. Here’s an example of a stereoscopic color anaglyph frame image. 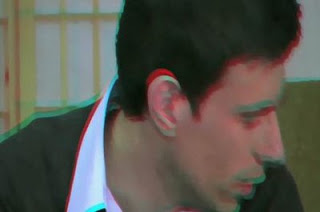 You will want to wear stereoscopic glasses while watching these to get the 3D effect.

In reading the article on how Christopher creates the final stereoscopic films i’m wondering whether a lot of the processing he’s doing in Nuke could be done directly in Studio Artist. For example, you could use Studio Artist image operations to combine the 2 processed left and right movies into a single color coded anaglyph movie. We’ll try to explore that as well as how to create stereoscopic paintings in more depth in a future blog post.

Christopher is also looking for other Studio Artist users to collaborate with for creating 3D painted videos.