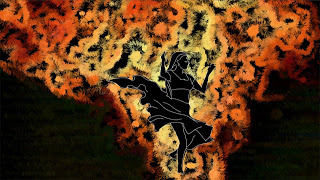 Long time Studio Artist user Nina Paley’s animated film ‘Sita Sings the Blues’ makes it’s north american premiere at the Tribeca Film Festival in New York City this week. Most of the film is hand animated using Flash, but there is a little bit of Studio Artist processing included in the film as well in various places.

In the title sequence, Flash and Studio Artist output were layer composited in Final Cut. In the scene called Agni Pariksha (the picture used with this article is taken from that scene), Nina composited a hand-rotoscoped animation of a dancer with a animated backdrop movie made in Studio Artist. Here’s a link to an interview with Nina.