Catherine Tate -The Making of Half-Life 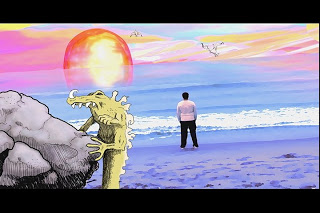 Catherine Tate was the VFX supervisor for this years Sundance film ‘Half-Life’ directed by Jennifer Phang, which featured some Studio Artist processed footage. Catherine discussed with me some of the work that went into the Studio Artist generated visual effect sequences for the film.

‘I ran all the mini dv footage that was shot for the dream/animated sequences through Studio Artist to create 2k painterly plates. I sometimes processed three or four different elements in Studio Artist per sequence. I used Simplify a lot and a line generator which is like an edge detect. I then used these as elements in a Shake comp in which additional comp processes like color replaces, blurs, and sharpens were added to make the footage look less generic. 2d artists were also brought in to draw additional elements that gave the comp a more organic feel, which Jennifer the director really wanted. This was especially useful when I couldn’t get a good edge line. Studio Artist was a terrific element generator for layers in a comp, that could then be manipulated to make more unique elements.’

‘I’ve also, for another project test, processed an oil painter type effect and used it as a displacement drive only in a comp. Nobody would ever figure out that the effect started one way and ended up looking totally different. Studio Artist is a wonderful way to create comp elements for effects design.’

Most of the film was shot on Super 16 and 35mm. Only the footage they intended to painterly animate was shot on MiniDV. ‘Working with MiniDV footage and Studio Artist for the animated sequences saved on front end processing costs while still achieving the 2K plates wanted for the final film output.’

Catherine has worked on many big budget film effect sequences you’ve seen in the past. She has a demo reel of some of her feature film effect work at www.tatefx.com. For more information on the upcoming screenings for Half-Life, check out the official site for Half Life here.

Year of the Fish Headed for DVD and NetFlix Release