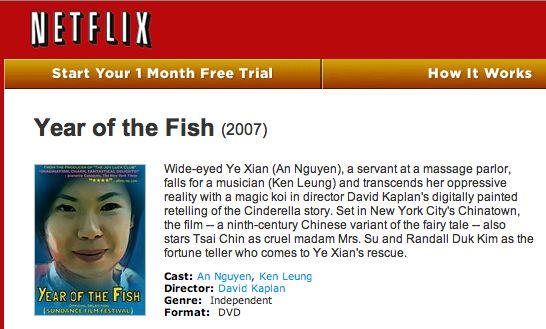 Today marks the official release for the ‘Year of the Fish’ DVD. ‘Year of the Fish’ is a feature length documentary created by writer and director David Kaplan. The film was completely animated using Studio Artist, and allowed David to make a feature length animated film with a fraction of the budget required for traditional manual rotoscoping techniques that require manual drawing by a large team of professional animators over an extensive period of time (like the movies produced by filmmaker Richard Linklater).

In the DVD audio commentary, filmmaker Kaplan offers a brief history of rotoscoping in the movies and explains why he chose to adapt the ancient Chinese version of “Cinderella” to modern-day Chinatown. He says that rotoscoping allowed him to “Situate the film halfway between the gritty underbelly of reality … and this fairy tale of a story where magical things happen.” Using a small crew and hand-held digital cameras, Kaplan and his cinematographer Adam Silver were able to shoot extensively and quickly on the actual streets of Chinatown.

David mentioned to me that the DVD also includes some extras, including an early animation test that he thinks ‘kinda looks better than the finished film in retrospect’. David has mentioned several times to me that in hindsight he wishes he would have made the visual look of the film much more loose and painterly, pushing boundaries and taking better advantage of Studio Artist’s ability to abstract visual imagery in an infinite variety of different styles.

The DVD also includes a series of before and after (original video vs rotoscoped video) example shots. I find these examples very interesting, because you can see that David was very adept at using Studio Artist to colorize the original video footage, giving it an visual glow and emotional impact that is completely not there in the original raw DV footage.

One trick that David made extensive use of to achieve this was using Studio Artist’s Color Palette Map image operation effect to artificially colorize his original footage. David started with impressionist paintings that he liked the visual look and coloring of. He then used Studio Artist’s ability to automatically generate a color palette from an image to build specific color palettes derived from the paintings he like the look of. He was then able to use those automatically generated color palettes along with the Color Palette Map ip op effect to recolorize the original footage as a part of his video processing Paint Action Sequences.

The great thing about the film in my opinion is that David was always able to make the animation work to help convey the storyline and emotion impact he was trying to achieve as a director. The animation always enhances the film, as opposed to some movies where extensive visual effects are a distraction from the story line (or serve to cover up a lack of story line). It was amazing to watch the film on a big screen in a large theatre when i was able to see it for the first time in Honolulu, the visual impact of the film on a large screen was stunning. But the cool thing about the DVD is all of the extras you get with it, including the additional footage and director’s commentary.

You can now find Year of the Fish on Netflix here.

For more information on the making of Year of the Fish, check out this earlier blog post.

Here’s a link to the film’s trailer on David’s web site.