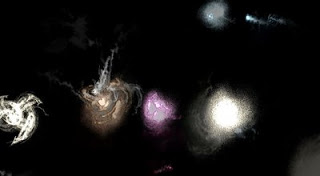 Time particles are the mechanism you can use to animate multiple instances of a MSG preset in an animation. In this particular animation we used a MSG Live Source Brush. The alternate approach would be to use a MSG Brush Load. Both options allow you to embed a MSG preset within a paint synthesizer preset.

The Paint Action Sequence (PASeq) used to generate the animation is shown below.

The next to last AutoPaint step is the paint synthesizer step that displays the time particles. The other steps in the PASeq were designed to fade and dissipate previous frame images to give a drifting smoke effect with some gravitation pull. The Geodesic Displacement ip op was used to simulate the gravitation pull, and the Geodesic Warp ip op was used to create the dissipation effect. By modifying the previously drawn frame and then overdrawing the time particles on top of it we introduce temporal continuity into the animation, reducing flicker that could occur if we erased to black each frame.

The name of the last PASeq action step is a little misleading. We used the Blur ip op with an Edge 1 composite setting to create an enhancement effect. This boosts the contrast of the rendered frame prior to it being output to a movie file.

By using multiple paint action steps in a PASeq that have different MSG presets embedded in them you could create animations using different kinds of MSG effects working together to create an overall aesthetic.