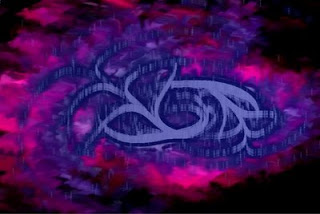 We’ve recently been profiling some different ways to utilize MSG presets within the Studio Artist Paint Synthesizer. Another approach to using MSG’s modular image processing architecture to extend the functionality of the paint synthesizer is the MSG Scan Generator option in the Path Start control panel. 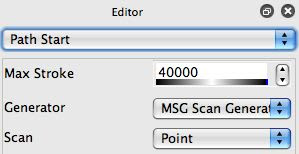 Some MSG processors that generate a series of internal scan coordinates as a part of their internal processing can make the scan generation available to external programs. All of the chaotic attractor MSG processors like the IFS generators support this feature. So you can use the chaotic attractor to generate a series of path start coordinates within the paint synthesizer when using this option. The first processor in the MSG processor chain needs to be a processor that supports this feature in order for this to work.

The screen snap below of the MSG advanced editor processor chain list shows a simple chaotic attractor preset that uses the IFSGen2 processor, followed by a 1to3 processor to convert the BW single channel attractor image into a 3 channel rgb output. The MSG preset was used as a MSG path start generator for this tutorial. 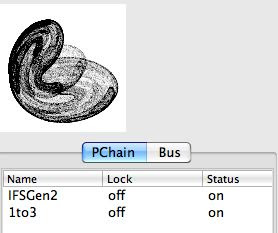 The example image at the top of the page is a screen snapshot from a paint animation. Directed evolution was used to create a series of different ISF chaotic attractors. A paint preset was built that used the MSG Scan path start generator. Paint Action keyframes were recorded in a Paint Action Sequence within Studio Artist to build a keyframed timeline for the desired animation. This was then rendered out using the Action : Animate with Paint Action Sequence : to Movie menu command.

The end result is an animating chaotic attractor that is painted by the paint synthesizer over the course of the the animation. By overpainting on top of a ip op modified previous canvas image a softer more organic effect was created for the generated paint animation.