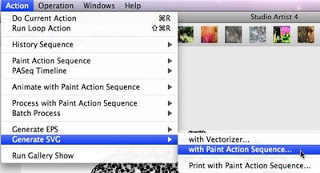 One cool new hidden feature in Studio Artist 4 is the ability to generate vector output from some MSG based effects. I forgot to mention this surprise new feature in the previous blog post on the anatomy of a black and white sketch effect. That particular MSG based sketch effect can be output as a raster canvas image or can be output to SVG or PDF vector files for resolution independent display or printing. 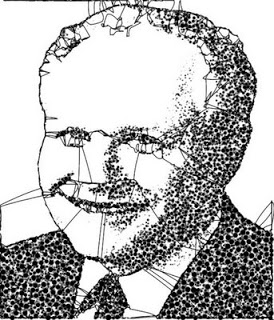 The new SVG vector output functionality directly ties into the internal vector drawing engine used in Studio Artist 4. So any Studio Artist functions that incorporate internal vector drawing can be directly spooled to a SVG output file while they are being drawn to the screen. The trick is to just record them as steps in a Paint Action Sequence (PASeq). You can then use the Action : Generate SVG : with Paint Action Sequence menu command to generate a SVG vector file from the PASeq preset.

The Generate SVG vector output menus also include a Print with Paint Action Sequence menu. The normal File : Print menu command prints from the raster canvas frame buffer. This additional Action :Generate SVG : Print with Paint Action Sequence menu allows you to print directly from the SVG vector generation process when playing a PASeq. There’s an option in that standard print dialog that allows for PDF file output (as opposed to printing),so that’s how you could generate a PDF file from a MSG preset effect that supports vector output.