Extending a Black and White MSG Sketch Effect to Color 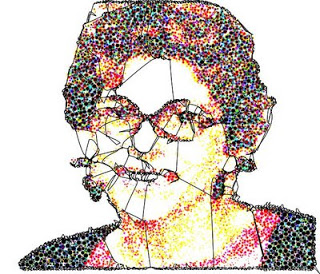 In a previous Anatomy of a MSG Effect post we discussed the inner workings behind programing a 2 step black and white sketch effect based on 2 different MSG presets combined together in a Paint Action Sequence (PASeq). In this post we’ll talk about how that black and white preset could be easily modified to generate color sketch effects.

As you recall from the previous post, our black and white sketch preset consists of 2 different MSG presets. The first generates a thin line continuous sketch of the source image features. The second generated a mass sketch consisting of black circles distributed in an apollonian packing pattern. 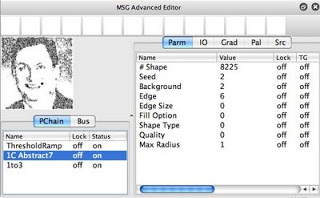 To do this all we have to do is first remove the last 1to3 processor and then duplicate the remaining 2 processors 2 additional times. We then have to modify the IO (input/output) connections for the 2 sets of duplicated processors so that they process the the red and blue channels of the source image. And we want them to output to the associated output color channels. The modified color sketch processor chain is show below. 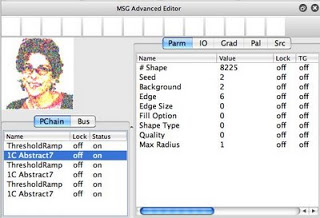 Once we’ve edited the mass sketch MSG preset to generate colored output, we now need to edit the original 2 step PASeq so that it uses the new color sketch MSG preset. To do this, simply go to the Paint Action Sequence palette and option click the first keyframe for the second MSG action step.

This will record over the original action step settings with the new color preset you edited. You could also control click the second PASeq action step and run the Interface to Action Step context menu as an alternative to option clicking the first keyframe in the PASeq timeline.

You can export the new PASeq preset if you wish to save it as a new preset file. To run the new sketch effect simply press the play button in the PASeq editor. The result is shown in the image at the top of this post.

If you look closely at the color sketch image at the top of the post you can see that the mass sketch circles associated with the 3 color channels are visually aligned. You can see this by looking at how a black disc appears where ever a circle aligns on the 3 color fields. This alignment is due to the fact that you simply copied the original 1CAbstract7 processor 2 additional times but left the internal parameter settings the same in the copies as the original. If you modify the 2 copies so that they each have a unique random seed parameters then you would get the image below for output when running the preset. 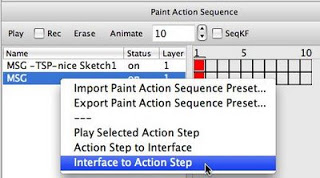 From a distance these 2 images may look very similar. But if you zoom into this new image and compare it with the original one at the top of the post you can see that the circle alignment in the 3 color fields is now gone, along with the associated full black circles. These 2 images can look very different when printed because of the differences in how the colored circles are aligned.

Another thing to keep in mind is that the vector output or vector printing options discussed in a previous post here for the black and white MSG sketch presets are not going to apply to this modified color sketch preset. You could generate a SVG file from this new MSG color sketch effect, but remember that the SVG vector output stream is based on what gets drawn internally in the MSG preset. The internal drawing is all black and white drawing into single color channels, not integral colored vector drawing. So the streamed SVG vector output would be 3 passes of overlaid black and white vector output. The colored appearance of the output of the MSG effect is due to the combination of the 3 color channels in the raster frame buffer, not due to integral colored vector drawing taking place in a single processor. There are other new MSG processors that do render full color using color vector drawing into 3 color channel output, and those MSG processors would generate colored vector output when streamed into a SVG file.